This is the first year we’ve been to Burger Palooza and it was quite a fun event.
Hosted by Menu Log, the event sported burgers from nine different burger vendors which were all around $15 each and one dessert vendor.
We had tried most of the places so opted to go for the ones which we hadn’t tried yet.
Our first stop, The Hardstyle Kitchen with their Burnt Ends Burger which consisted of 14 hour wood smoked brisket burnt ends, wagyu beef brisket patty, double American cheese, lettuce, McClures pickles and sweet dill and mustard mayo. The brisket in this was tops and didn’t fall apart when you ate it. The flavour of this was super tasty. 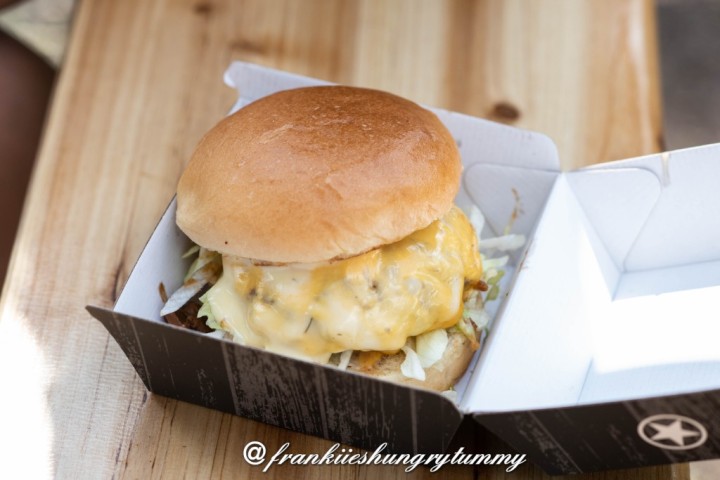 Next stop was Burger Head with their Bring the Ruckus burger. This was made with a BH smashed patty, maple bacon jam, smoked cheese sauce, gravynaisse, American hi-melt cheese and beer pickled onions. This was my favourite burger! The flavours were just delicious and the burger was soft and easy to eat.

Third on the list was Chef’s Kitchen with their Red Rock. This was a house made beef patty, pepper jack cheese, southern fried onion rings, beef chilli, spiced sour cream, pickles smoked red milk bun. This isn’t something I’d normally choose but it was good! The best thing about it was that it looked different from the rest and was also super easy to eat.

Drinks wise, we had some Fireball with apple which was $12 and a Love Bite which was watermelon and mandarin flavour for $5.

Last but not least was dessert from Duo Duo Ice Cream. We love these guys and are absolutely addicted to their fried ice creams.
This time I opted for the brookie sandwich which had strawberry gelato, chewy brownie cookies, white choc crack and honeycomb. I absolutely loved this!

The event also had some entertainment such as a burger eating contest where there were two guys competing for how many McDonald’s cheeseburgers they could eat. The winner managed to eat six at the most. The prize was the burgers ahahaha.
After the burger eating competition was a chilli eating competition. Contestants were puking all over the place!
The last piece of the competition was to eat as many chillis as you could in one minute. The prize for this one was much better with the winner getting a BBQ.

Definitely one to try if you haven’t been yet!