We were lucky enough to get invited to try out Radley’s Rotisserie Chicken and Burgers by Ompty Media.
When you walk in, you realise it isn’t like your average chicken shop. It’s decorated beautifully, almost like you are in a fancy gazebo in a lush garden somewhere. The décor is all white and decorated with lots of greenery.

Jason Pope, the founder of Radley’s brought in the concept from his 22 years in Asia. He spent 15 years in Singapore and owns a chain there called Rotisserie. Wanting to bring in comfort food at affordable prices, he travelled back to Australia and opened Radley’s.
When you get to tasting the food, you can tell that it is high in quality but is at an affordable price point with another store soon to be opened on George Street near the Met Centre.
Jason is personable and loves to interact with his customers. We noticed that he not only was speaking to us about the background of the business but as well, to others sitting down, enjoying their food which makes you want to come back even more. Knowing someone is so passionate about what they do and deliver is such a rare thing these days.
Jason started us off with the double bacon roll which consists of mounds of bacon and a fried egg on a milk bun. The milk bun is such a good idea as it stayed in one piece. Most places, the burger falls apart before you take your first bite. It was super flavoursome and soft.

Next came out the meat lovers breakfast which can be found on the Specials Board. This was made especially for tradies. It’s got char grilled Angus, which is cooked in the oven overnight at a low temperature, making it super soft. It’s also got chicken sausages, bacon, barbecue sauce and caramelised onion. Wow! This is a beast of a thing and is super tasty – it would probably have to be one of my faves on the menu!

The third dish served was a vegetarian option of zucchini and haloumi fritters topped with tomato, chilli jam and cream. This was just wonderful – it was super soft and flavoursome. It’s also nice that they have incorporated some vegetarian options and it’s definitely a growing community. It’s also nice for those who aren’t in the mood for meat dishes.

Next was a trio of salads – chicken, chickpea, sweet potato, potato, coleslaw. These are so refreshing!

Then we were served some kimchi sliders – these were so cute! They were made of chicken soaked in buttermilk with cucumber and cheese. Loved this! The chicken was surprisingly good. I wasn’t sure what to expect with the kimchi flavour but it really was delicious.

Plated up next was the chargrilled steak which is around 180 to 200 grams and is served with chicken gravy and fries which are lightly battered and cooked for four minutes in a digital fryer. This too was delicious. The steak was soft and juicy – cooked to perfection and the chips were just as good.

The chicken gravy is made from roasted chicken with vegetables cooked in an oven. The drippings of the rotisserie are the basis for the flavour which is just delicious.
Next was a plate of chicken and chips. These guys use Lilydale chickens which you know are fresh! It’s created using a special mix of ingredients concocted ten years ago. The chicken is marinated in a ground rub then put into a European rotisserie and cooked for seventy minutes.
It too is served with the chicken gravy, fries and a side of coleslaw. Another one of my favourite dishes!

Next up was the Radley’s burger which is made of a 100 day blank Angus beef patty with salad and bacon on a French burger bun. This is a towering beast of a thing which that melt in your mouth beef. Such a good burger!!!

Last but not least were the buttermilk pancakes. These came with honeycomb, butter, mixed berries and maple syrup. Pancakes are my favourite and these were just delicious! The pancakes were light and fluffy and the honeycomb gave it a nice flavoursome hit. 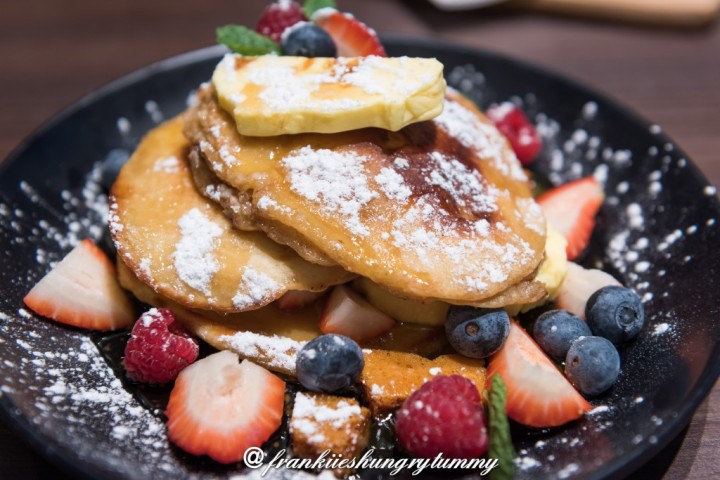 This place is definitely one to try. If you’re looking for some homely cooked food at an affordable price, head on in and try out their menu as I guarantee you won’t be disappointed!