Fast food is second to my first favourite, dessert.
I just can’t get enough of the stuff! I know it’s unhealthy and no good for your body but I think my body is accustomed to all the fat and deep fried oily goodness I put into it.
Unfortunately, I am only doing my top five because we didn’t focus on going to too many fast food joints and the others that didn’t make the list, well… you know why!
In-n-Out Burger
Last on my top five is In-n-Out Burger.
After all the hype, we lined up for about five minutes, got our food and were super disappointed. Their burgers seriously tasted average and their chips were just weird.

Again, going back to my friends, apparently there is a secret menu and the stuff on the normal menu isn’t as good. Well I honestly don’t understand the point of having a normal menu which isn’t “as good”…
Anyway, they are on my top five because the meat patties weren’t too bad compared to the rest.

Popeyes Chicken
Popeyes Chicken in New Orleans comes in at number four for me because it’s some good fried chicken.
I loved the battered skin! Surprisingly, it was melt in your mouth soft (although it looks quite hard) and it wasn’t as oily as I expected it to be. The potato and gravy was also pretty good and made a nice accompaniment to the meal.
We had this for “breakfast” as it was the only place open within close vicinity of where we were and I was surprised that I didn’t feel sick after eating it. 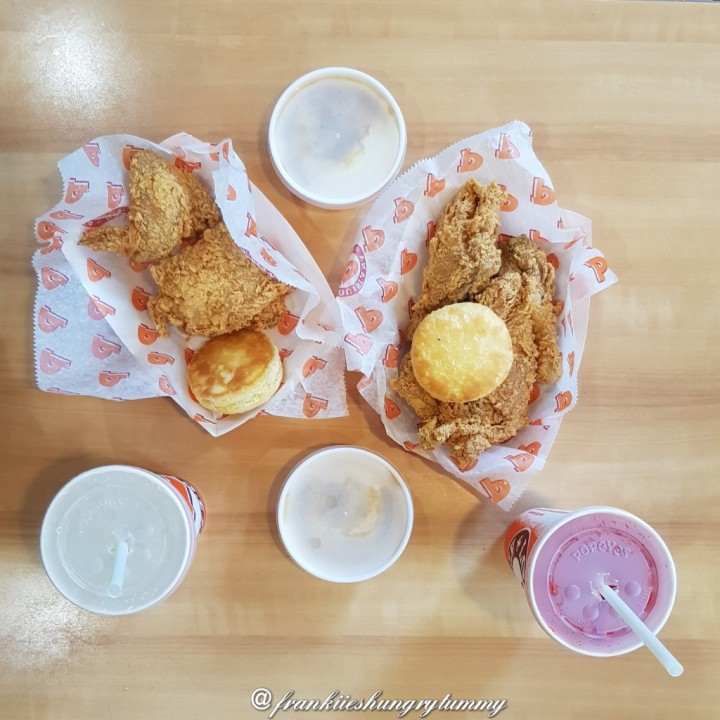 Taco Bell
Oh how I love Taco Bell! I’m so sad that they closed the chain and we don’t have it here in Sydney anymore (although I hear rumours that they are opening up somewhere near Campbelltown).
I unfortunately didn’t try the food when they were operating in Australia because I had never had an interest in Mexican food until I became a vegetarian and had to eat more beans.

But honestly, the food here was great and now I know what Niykee Heaton raves on about when I see her eating Taco Bell all the time. I seriously don’t know why they all closed down but I think “Mexican” food is starting to get bigger here after Guzman Y Gomez opened up so fingers crossed they re-open.

Five Guys
Five Guys cuts it at number two.
This place was much better than In-n-out Burger. Strange that they don’t do “meals” though?! You have to order your fries and drink separately.
Oh well, can’t complain because the food was good and the chips were normal! The patties were super moist and flavoursome and loving that you can choose as many FREE toppings as you like!

This place is another hit and gets super busy. The turnover isn’t too bad provided you don’t have people sitting there for hours after finishing their food just to have a chat and catch up on their social lives. Shake Shack
So Shake Shack slices through at number one.

Their burgers are juicy, flavoursome goodness and their homemade lemonade is to DIE for! Not to mention their crazy milkshakes.
This place also gets super packed but again, the turnaround is quite good and by the time you get your order, you’ve secured yourself a seat. They do well for themselves by putting out seasonal, eye appealing menu items like their shakes which makes people want to come back and try something new (not that there’s anything wrong with being a creature of habit and ordering the same thing on the menu as I do that all the time but it is nice to have something new to take a photo of once in a while).

So there you have it, guys – my top five.